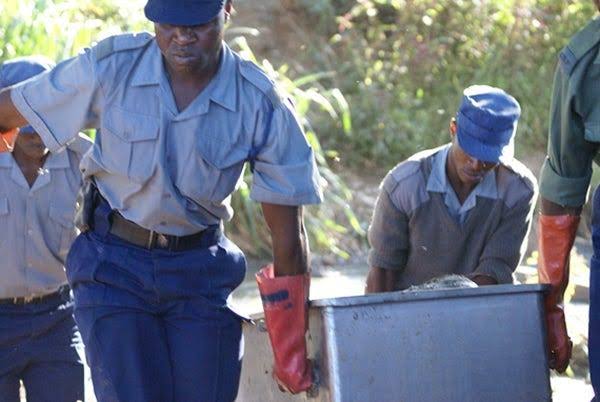 A man from Gwanda was arrested for strangling and killing his workmate. To conceal the murder, he staged it as suicide. The accused is reported to have dumped the victim’s body on a railway line, where it was crushed by a goods train.

At prima facie, the case looked like a suicide, however, upon thorough investigation, it was deemed a murder case.

Chronicle reported that, Albert Ncube (31) of Spitzkop Suburb was not asked to plead when he appeared before Gwanda magistrate, Miss Lerato Nyathi facing a murder charge.

It is reported that, Ncube allegedly accused the late Onias Mushipe of stealing his girlfriends which resulted in a misunderstanding between the two. Prosecutor, Mr. Silent Shoko told the court that,

“On 1 June at around 7 PM Ncube and nine other artisanal miners including Onias Mushipe boarded a Toyota Granvia vehicle and headed to Prospect Gold Mine at Mgomo Farm in Gwanda. Along the way, a misunderstanding arose between Mushipe and Ncube after Ncube accused him of taking away his girlfriends.”

“Other workmates managed to calm them down in order to stop them from fighting further. The gang dropped off at Cobra Mine which is opposite Mgomo Farm. The other mineworkers went ahead to do their work. Mushipe, Ncube, and the other workmate Mr. Tinashe Dube remained behind to resolve the dispute they had earlier.”

‌
However, it is reported that the altercation continued and turned violent resulting in Ncube tripping Mushipe to the ground and strangling him. Dube witnessed the whole murder, upon realizing what Ncube had done, Dube is reported to have fled, leaving Ncube on the scene.

“In a bid to conceal the offense Ncube then took the body to a nearby railway line and placed it there with the head on the line facing upwards. He said at around 10 PM Mushipe’s body was crushed by a good’s train,” said Shoko

The matter was reported to the police and Ncube was arrested on Saturday after a tip-off.

Ncube is not a first-time offender, he has been on the run for the past two years after he committed robbery and attempted murder in Fort Rixon where he reportedly robbed a victim and further tried to dump the body in a disused mine.

He has been remanded in custody to 13 July.

Why Would Mnangagwa Entertain Java?

Well done South Africa 🇿🇦 Springboks and to Tendai Mtawarira you did make us...

Why Would Mnangagwa Entertain Java?