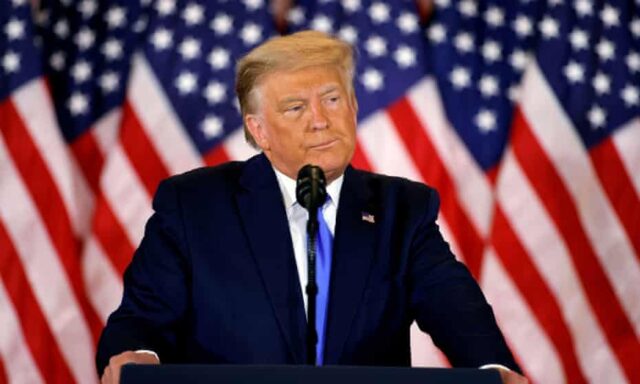 US President Donald Trump has called the 2020 US election “A fraud to the American public.”

During a press conference at the White House this morning, Trump attacked the mail in ballots and mentioned that he did not want them to be counted.

“Millions and millions of people voted for us tonight.

“This is a fraud on the American public, this is an embarrassment to our country.

“So our goal now is to ensure the integrity for the good of this nation. This is a very big moment.

“This is a major fraud on our nation.

“We want the law to be used in a proper manner. So we will be going to the US Supreme Court, we want all voting to stop.

“We don’t want them to find any ballots at 4am and add them to the list.”

He also said the results tonight have been phenomenal and voters have come out in record numbers.

Trump added “We won states that they were not expecting like Florida, Texas and Ohio. We are winning Pennsylvania by a huge amount of votes as well.”

Meanwhile, his opponent Joe Biden says he believes he is on course to win the US election.

While Donald Trump says the Democrats are trying to steal the election – despite being in the lead.

The President is ahead in the three key swing states of Pennsylvania, Michigan and Wisconsin.

But the Biden camp are confident they will flip those as hundreds of thousands of votes remain to be counted.

Joe Biden has spoken to supporters in Delaware, a state which has remained Democrat.-Breaking news

Prophet Passion Java speaks: 90% of men cheat, nobody can stop...