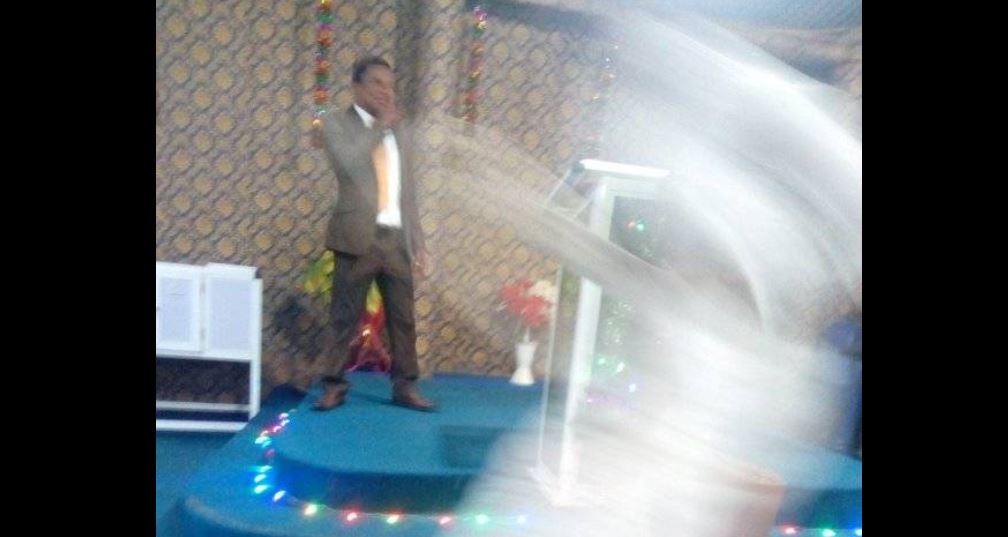 A Nigerian pastor based in Cotonou, Benin Republic, has shared pictures of an “angel” which he says was captured on camera in his church.

Posting on his Facebook page, Pastor Ekuma Uche Philips said the “angel” was caught on camera during his church’s cross-over service on January 1, at exactly 12:13 am.  He wrote;

THIS IS DOUBLE WONDERS INDEED.

An ANGLE was captured on Camera during our cross over Night, on Friday 31th Dec,

I have never seen such thing since l was born,.

We are in the day of great WONDERS.

While some said the picture was doctored saying angels cannot appear wearing those sneakers, some said those mocking the picture were agents of the devil. In recent years, some other pastors including Pastor Bushiri have done things claimed to be divine that left members of the public divided. Bushiri, known as Major 1 posted a video in which he is seen coming down the stairs at his mansion in South Africa.

The fascinating part is when he gets to the last step to connect with the bottom floor, his feet do not touch the ground and he continues to walk slowly in the air and finally touches the ground.

A South African pastor with an unprintable name and a Zimbabwean pastor, Talent Madungwe, claim they went to heaven, separately, where they dined with God while gold reportedly rained at one of Emmanuel Makandiwa’s services.

Some believe that miracles are happening in this era and age while some say those claiming to be performing them are just fooling their followers to fatten their pockets.

SAD NEWS: Ziyambi dies after being stabbed by drunkard at funeral

Ginimbi left his will in the hands of retired army colonel