“If I could leave Russia right now, I would. But I can’t quit my job,” says Andrey. He can’t afford to get a mortgage in Moscow now interest rates have been hiked.

Millions of Russians like him are starting to feel the effect of Western economic sanctions designed to punish the country for invading neighbouring Ukraine.

“I am planning to find new customers abroad asap and move out of Russia with the money I was saving for the first instalment,” says the 31-year-old industrial designer.

“I am scared here – people have been arrested for speaking against ‘the party line’. I feel ashamed and I didn’t even vote for those in power.”

Like other interviewees for this article we are not using his full name or showing his face for security reasons. Some names have been changed.

The sanctions now hitting Russia are being described as economic war – they aim to isolate the country and create a deep recession there. Western leaders hope the unprecedented measures will bring about a change in thinking in the Kremlin.

Ordinary Russians face seeing their savings wiped out. Their lives are already being disrupted.

The sanctions against some Russian banks include cutting them off from Visa and Mastercard, and consequently Apple Pay and Google Pay.

Daria, 35, a project manager in Moscow, said this meant he’d been unable to use the metro.

“I always pay with my phone but it simply didn’t work. There were some other people with the same problem. It turned out that the barriers are operated by VTB bank which is under sanctions and cannot accept Google Pay and Apple Pay.

“I had to buy a metro card instead,” he told the BBC. “I also couldn’t pay in a shop today – for the same reason.”

On Monday Russia more than doubled its interest rate to 20% in response to the sanctions after the rouble plunged to record new lows. The stock market remains closed amid fears of a massive share sell-off.

The Kremlin says it has enough resources to weather the sanctions, but this is debatable.

Over the weekend the central bank appealed for calm amid fears of a run on the banks, which happens when too many people try to withdraw money.

“There are no dollars, no roubles – nothing! Well, there are roubles but I am not interested in them,” said Anton (name changed), who is in his late 20s and was queuing at an ATM in Moscow.

“I don’t know what to do next. I am afraid we are turning into North Korea or Iran right now.”

Buying foreign currency costs Russians about 50% more than it did a week ago – if they can get hold of it at all. 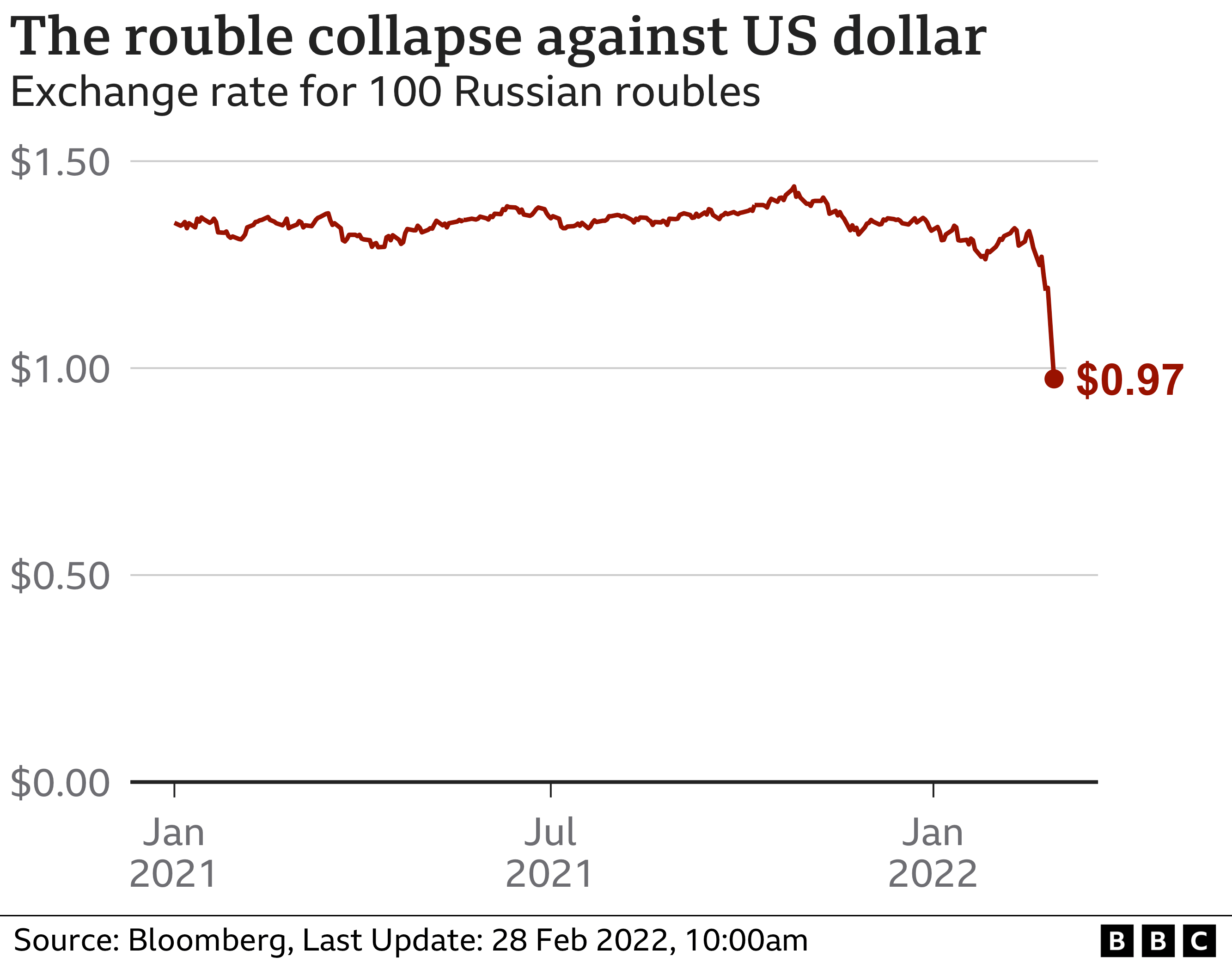 For Russians, the rouble-dollar rate has long been a sensitive issue.

In the 1990s following the collapse of the Soviet Union, the dollar was the only hard currency Russians kept their savings in – the safest bet was under the mattress.

When President Boris Yeltsin’s government defaulted on its debt in 1998 those who’d been sleeping on their money felt vindicated.

However, over the following decade various central bank measures helped reassure Russians about the rouble. Deposits placed in Russian currency began to grow and so did the amount of money Russians invest in the stocks of Russian companies.

This time has been no different.

As soon as war was unleashed on Ukraine last week, Russians flocked to cashpoints, remembering lessons learnt in previous crises.

Ilya (name changed), who is in his early 30s, has just finished paying off his mortgage in Moscow. He says he is unable to relocate “any time soon”.

“When the operation in Donbas started I went to the ATM and withdrew the savings I had in Sberbank in dollars. Now I literally keep them under my pillow.

“The rest of my savings are still in the banks: half in dollars and the rest in roubles. If things get worse, I’ll withdraw the lot. I am scared because I expect a wave of burglaries. But it is what it is.”

Images on social media have shown long queues forming at ATMs and money exchanges around the country in recent days, with people worried their bank cards may stop working or that limits will be placed on the amount of cash they can withdraw.

Dollars and euros began running out within a couple of hours of the invasion. Since then, very limited amounts of those currencies have been available and there is a cap on how many roubles you can withdraw.

Standing at one queue in Moscow, Evgeny (name changed), 45, said he wanted to withdraw money to pay off his mortgage.

“Everyone I know is anxious. Everyone is stressed. I have no doubt life will get worse. War is horrible.

“I think all the countries employ double standards and now ‘big countries’ are measuring each other’s strengths, deciding which one is cooler. And everyone is suffering.”

Marat, 35, said: “Today is the first day I decided to withdraw money, and did not experience any troubles. I withdrew roubles just in case.

“I am not great at forecasting but I suspect our life will get worse. Time will tell.”

The cash problem is not limited to Moscow: people have been rushing around Perm, Kostroma, Belgorod and other provincial cities to get dollars or euros, BBC Russian reports.

An anonymous IT-specialist even created a Telegram bot that automatically requests if there are euros or dollars in the ATMS of Tinkoff, a popular private bank, and if so, shares the location with subscribers.

Many have been trying to pre-order cash via their banking apps, a feature of Russia’s advanced banking system.

On Sunday evening, when sanctions against Russian central bank reserves were announced, you could still use an app to order a dollar for up to 140 roubles, and a euro for up to 150.

But by Monday customers of Russia’s biggest state-backed bank, Sberbank, told BBC Russian they could not order cash via the app at all – they had to go to its office and sign a form to do so.

The banks deny there’s a liquidity shortage – and analysts agree it is more likely the shortage of cash in ATMs reflects an attempt to prevent a run on the banks.

The Kremlin has said Russia expected these latest sanctions and is ready for them, although it has not said whether businesses will be given extra help, as they were during the pandemic.

But ordinary Russians, many of whom get their information from state-controlled television which repeats many of the Kremlin’s lines, are expected to start noticing differences to their lives soon.

Already residents in Moscow are reporting some queues in food stores as people buy goods they think will be in short supply due to price rises or trade restrictions.

Russian companies could end up cutting hours or stopping production as sanctions bite. As well as their savings falling in value, many Russians are predicted to lose their jobs as the economy reels from being cut off from financial markets in the West.

For Russians this all brings back memories of what happened when President Putin annexed Crimea in 2014 and people queued for hours to get cash.

Currency offices had to hastily buy new five-digit exchange rate boards when the old ones ran out of space.

Breaking: The United Arab Emirates president died at the age of 73..

Mother and daughter swept away by floods in Sebakwe River

“She divorced Sauro (Souljah Love) and got impregnated by Pauro…

Johane Masowe vs Marange apostolic to meet over child marriages